This specification describes the htsget protocol version 1.3.0. This printing is version 7ab198a from the hts-specs repository.

This data retrieval API bridges from existing genomics bulk data transfers to a client/server model with the following features:

Explicitly this API does NOT:

All API invocations are made to a configurable HTTP(S) endpoint, receive either URL-encoded query string parameters (GET) or a JSON request body (POST), and return JSON output. Successful requests result with HTTP status code 200 and have UTF8-encoded JSON in the response body. The server may provide responses with chunked transfer encoding. The client and server may mutually negotiate HTTP/2 upgrade using the standard mechanism.

Any timestamps that appear in the response from an API method are given as ISO 8601 date/time format.

HTTP responses may be compressed using RFC 2616 transfer-coding, not content-coding.

Requests adhering to this specification MAY include an Accept header specifying the htsget protocol version they are using:

JSON responses SHOULD include a Content-Type header describing the htsget protocol version defining the JSON schema used in the response, e.g.,

The server MUST respond with an appropriate HTTP status code (4xx or 5xx) when an error condition is detected. In the case of transient server errors, (e.g., 503 and other 5xx status codes), the client SHOULD implement appropriate retry logic as discussed in Reliability & performance considerations below.

For errors that are specific to the htsget protocol, the response body SHOULD be a JSON object (content-type application/json) providing machine-readable information about the nature of the error, along with a human-readable description. The structure of this JSON object is described as follows.

The following errors types are defined:

The error type SHOULD be chosen from this table and be accompanied by the specified HTTP status code. An example of a valid JSON error response is:

The htsget API enables the retrieval of potentially sensitive genomic data by means of a client/server model. Effective security measures are essential to protect the integrity and confidentiality of these data.

Sensitive information transmitted on public networks, such as access tokens and human genomic data, MUST be protected using Transport Level Security (TLS) version 1.2 or later, as specified in RFC 5246.

If the data holder requires client authentication and/or authorization, then the client’s HTTPS API request MUST present an OAuth 2.0 bearer access token as specified in RFC 6750, in the Authorization request header field with the Bearer authentication scheme:

All API resources should have the following support for cross-origin resource sharing (CORS) to support browser-based clients:

The recommended endpoints to access reads and variants data are:

The JSON response is a “ticket” allowing the caller to obtain the desired data in the specified format, which may involve follow-on requests to other endpoints, as detailed below.

The client can also request only read or variant headers. For example, a header request can be used to discover the list of referenceName values applicable for a data stream, provided that the data stream contains @SQ (reads) or ##contig (variants) headers.

The list of fields is based on BAM fields:

As with range filtering, a server may include more fields than explicitly requested, a possibility which clients must be prepared to handle. The fieldsParameterEffective attribute in the GA4GH service-info metadata (see below) indicates whether a server supports filtering individual fields. In any case, servers must not generate any response payload that is invalid under the respective format specification (for example, if a request for reads in BAM format includes QUAL, then the response must provide SEQ as well).

In addition to the GET method, servers may optionally also accept POST requests. The main differences to the GET method are that query parameters are encoded in JSON format and it is possible to request data for more than one genomic range. The data returned is the same JSON “ticket” as that returned by the GET method, as detailed below.

Htsget POST requests must be “safe” as defined in section 4.2.1 of RFC 7231, that is they must be essentially read-only.

It should be expected that htsget servers will have a limit on the size of POST request that they can accept. If an incoming POST request is too large, the server SHOULD reply with a PayloadTooLarge error.

POST and GET requests should use the same URLs.

The POST request body is a JSON object containing the request parameters, which have similar names and meanings to those used in the GET query. A notable difference is that the referenceName, start and end parameters are not used at the top level of the JSON object. Instead as they are put into an array under the regions key, which allows more than one range to be specified.

The regions parameter is an array of objects which describe the locations to be returned. Each location object contains a referenceName, which must always be present, and optional start and end tags.

The first region in the example above shows how to return all reads for reference “chr1”.

To return reads covering a single base, the client should use an end position one greater than the start, as shown in the second region in the example which requests the 1000th base of reference “chr2”.

As with the GET request, the server response may contain a super-set of the desired results. Clients will need to filter out any extraneous records if necessary.

An example of a JSON response is: 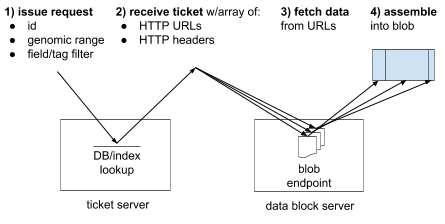 While the blocks must be finally concatenated in the given order, the client may fetch them in parallel and/or reuse cached data from URLs that have previously been downloaded.

When making a series of requests to fetch reads or variants within different regions of the same <id> resource, clients may wish to avoid re-fetching the SAM/CRAM/VCF headers each time, especially if they are large. If the ticket contains class fields, the client may reuse previously downloaded and parsed headers rather than re-fetching the header-class URLs.

Note: the base64 text should not be additionally percent encoded.

To provide robustness to sporadic transfer failures, servers should divide large payloads into multiple data blocks in the urls array. Then if the transfer of any one block fails, the client can retry that block and carry on, instead of starting all over. Clients may also fetch blocks in parallel, which can improve throughput.

Initial guidelines, which we expect to revise in light of future experience:

The data block URL and headers might contain embedded authentication tokens; therefore, production clients and servers should not unnecessarily print them to console, write them to logs, embed them in error messages, etc.

The GA4GH Service Registry API specification allows information about GA4GH-compliant web services, including htsget services, to be aggregated into registries and made available via a standard API. The following considerations SHOULD be followed when registering htsget services within a service registry.

This appendix lists the significant functionality introduced and changes made in each published version of the htsget protocol.

Added POST requests for both reads and variants endpoints, allowing data to be queried via the HTTP POST method, and defining a JSON request object to be used as the POST payload instead of the corresponding set of htsget query parameters. Defined a new PayloadTooLarge error type.

Added a class=header query parameter for requesting headers only rather than including reads/variants data records.

The first published version of the htsget protocol, which specified only the GET /reads/<id> endpoint. BAM/CRAM sequencing data could be queried via the HTTP GET method using format, referenceName/start/end, fields, and tags/notags query parameters.